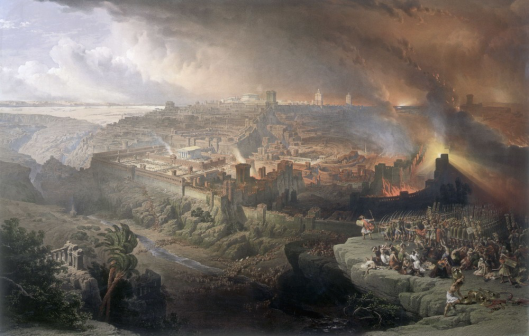 Ezekiel 33:21-33 contains a report of the fall of Jerusalem. On the night before the herald arrived with that world-shattering news Ezekiel received a word from the Lord telling of doom that is to come upon the Judeans who remained in the land, the non-deportees (see v. 24 “the people living in those ruins in the land of Israel”). This is to serve as a warning for Ezekiel’s community who delight in listening to Ezekiel but with no true effect upon their hearts (cf. the repeated pronouncement, “they hear your words but do not put them into practice” vv. 31, 32).

This passage has a profound echo in Jesus’ words to his own contemporaries in Matthew 7:26; Luke 6:49: “everyone who hears my words and does not do them”. Jesus’ word brings with it a somber warning for those of his listeners who have ears to hear the echo of Ezekiel. Just as Ezekiel’s warning against hearing-without-acting preceded the terrible announcement concerning the ominous fate of Jerusalem, so Jesus’ foreboding words should be heard as a warning not unlike that of Ezekiel: if the people don’t respond with their whole hearts then Jerusalem will destroyed, again.

41 As he came near and saw the city, he wept over it, 42 saying, “If you, even you, had only recognized on this day the things that make for peace! But now they are hidden from your eyes. 43 Indeed, the days will come upon you, when your enemies will set up ramparts around you and surround you, and hem you in on every side. 44 They will crush you to the ground, you and your children within you, and they will not leave within you one stone upon another; because you did not recognize the time of your visitation from God.”

45 Then he entered the temple and began to drive out those who were selling things there; 46 and he said, “It is written, ‘My house shall be a house of prayer’; but you have made it a den of robbers.”

47 Every day he was teaching in the temple. The chief priests, the scribes, and the leaders of the people kept looking for a way to kill him; 48 but they did not find anything they could do, for all the people were spellbound by what they heard.

One curious feature of this passage is the final note that “all the people were spellbound by what they heard” (NRSV). Another translation has “all the people hung on his words” (NIV). This could also be seen as a faint echo of the contemporaries of Ezekiel who was told the following words: “Your people are talking together about you by the walls and at the doors of the houses, saying to each other, ‘Come and hear the message that has come from the Lord’. My people come to you, as they usually do, to hear your words, but  they do not put them into practice…to them you are nothing more than one who sings love songs with a beautiful voice and plays an instrument well” (Eze 33:30-32). In other words, the people were mesmerized by the prophet. This was true of both Ezekiel and Jesus. But the dire predictions concerning the people and the beloved city of Jerusalem was also equally certain for both Ezekiel and Jesus:

Ezekiel 33:33 “When all this comes true—and it certainly will—then they will know that a prophet has been among them”

Matt 24:33-34 “When you see all these things, you know that it is near, right at the door. Truly I tell you, this generation will certainly not pass away until all these things have happened”

The continuing relevance of Ezekiel’s message for Jesus’ contemporaries lay simply in this: if they did not turn from their zealous festering for violent revolt against Rome and heed his message (in other words, if they didn’t repent from their current aspirations and give allegiance instead to the ευγγελιον of Jesus) then the people of Jesus’ day would experience the same terrible fate as the people of Ezekiel’s day—a fallen city and all the horror that accompany it. 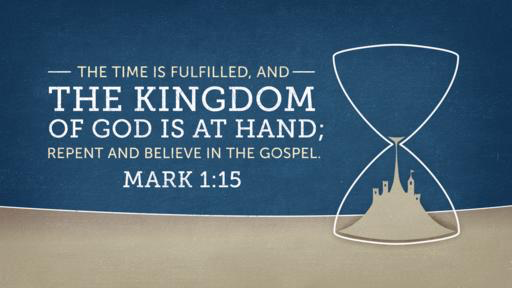 What is the background and meaning of “repentance” as used in the gospel accounts? The word is traditionally understood from within an ethical framework: cease from sinful activities or lifestyles and begin to live morally upright and virtuous lives. But perhaps Jesus’ (and the Baptist’s?) call to “repentance” should be understood primarily from within an eschatological, rather than ethical, framework. The difference is subtle but important. A study of the relevant Old Testament texts is crucial here. And one strand that comes out is the question of the nature of the repentance being a corporate activity versus an individual activity. Thinking of repentance in ethical terms misleadingly implies isolated individual activities. But perhaps repentance is meant to be understood as a corporate activity having quite different implications. In other words, the call to repentance means what it means within the overarching announcement of the return of YHWH and the dawning of the kingdom of God.

One interesting text related to this is Jubilees 1:13-18. The book is dated from about 150 B.C. so it is a fitting text to demonstrate the way some Jews in the Second Temple period thought about repentance. In this passage, the audience of the book of Jubilees lives long after the time of Moses but is being reminded that not only their exile was predicted by the scriptures but also their national repentance, and it will serve an eschatological purpose. Notice how the predicted repentance serves as the catalyst for the end of exile and construction of the new sanctuary/temple (see bold text):

As VanderKam rightly summarizes, “Some future generation, presumably that of the author [of the Book of Jubilees], must receive this message of God’s faithfulness, Israel’s infidelity, and the power of confession, repentance, and obedience to the covenantal stipulations to open a new day in the covenantal relationship between the Lord and his holy people” — James C. VanderKam, “Jubilees, Book of,” ed. David Noel Freedman, The Anchor Yale Bible Dictionary (New York: Doubleday, 1992), 1031.

This is not to suggest that there is no ethical importance to repentance, merely that it is not the theologically load bearing element of the concept. Repentance, as a national and religious phenomenon, was meant to result in so much more than a new generation of morally upright people; national repentance was expected to result in the end of exile, the return of YHWH, and the rebuilding of the temple—in short, repentance was the advance sign of the fulfillment of all the glorious prophetic promises in Israel’s scriptures. Repentance was therefore eschatological.

So when Mark tells the readers of his gospel that “John the baptizer appeared in the wilderness, proclaiming a baptism of repentance for the forgiveness of sins, and people from the whole Judean countryside and all the people of Jerusalem were going out to him, and were baptized by him in the river Jordan, confessing their sins” (Mark 1:4-5), Mark is tapping into exactly this eschatological matrix of hope. Or, to put it another way, there is a reason that Matthew says “John the Baptist appeared in the wilderness of Judea, proclaiming, ‘Repent, for the kingdom of heaven has come near’” (Matthew 3:1-2). Repentance has eschatological import.