Herbert’s prose and poetry has left a lasting influence on others. Henry Vaughan, Charles Wesley, Samuel Taylor Coleridge, Gerard Manley Hopkins and C. S. Lewis are just a few names (more could be added) of people who have acknowledged their literary debt to Herbert; and that’s not to mention contemporary poets such as Luci Shaw or Malcom Guite.

He is best known today from two significant works, one prose and one poetry. The prose work is titled A Priest to the Temple or The Country Parson and it lays out his thoughts on the ministerial vocation. His insights in this book find richly suggestive connections in some of his poems on the same topic. His collection of poetry, which he gave to his friend Nicholas Ferrar on his deathbed, is titled The Temple. It is a brilliant masterpiece whose poems can be read individually (that is, as a collection of self-contained poems) or as a larger, longer work complete with thematic development as one progresses through the poems. Throughout The Temple there are dense allusions both to scripture and to other poems within the collection.

Some of his hymns are still sung in churches today (e.g., ‘The God of love my Shepherd is’, ‘Let all the world in every corner sing’, and ‘Teach me, my God and King’).

Prayer the Churches banquet, Angels age,
Gods breath in man returning to his birth,
The soul in paraphrase, heart in pilgrimage,
The Christian plummet sounding heav’n and earth;

Engine against th’ Almightie, sinners towre,
Reversed thunder, Christ-side-piercing spear,
The six-daies world transposing in an houre,
A kinde of tune, which all things heare and fear;

Softnesse, and peace, and joy, and love, and blisse,
Exalted Manna, gladnesse of the best,
Heaven in ordinarie, man well drest,
The milkie way, the bird of Paradise,

Church-bels beyond the starres heard, the souls bloud,
The land of spices; something understood.

Malcolm Guite has an insightful reflection on this poem over on his blog. Click here to read it. He introduces the poem by describing it as

a kind of rainbow refraction of many insights, a scattering of many seeds broadcast. For each of these images is in its own way a little poem, or the seed of a poem, ready to grow and unfold in the readers mind. And the different seeds take root at different times, falling differently in the soil of the mind each time one returns to this poem. I have been reading it for over thirty years now and I still find its images springing up freshly in my mind and showing me new things. For the purpose of this Introduction we will delve in and examine four of these little seeds, these poems in themselves within the images, before we take a wider view and see how they all fit together in the larger poem itself.

To read Guite’s reflections on “four of these little seeds” click the link above or just buy his book Faith, Hope and Poetry: Theology and the Poetic Imagination.

There are many good editions of Herbert’s poetry that can be found. The books below are helpful introductions to his life and writings. Alternatively, if you are not yet ready to read a whole book, you can start by visiting this website that lots of interesting facts and resources: GeorgeHerbert.org.uk

Music at Midnight: The Life and Poetry of George Herbert by John Drury

A Year With George Herbert: A Guide to Fifty-Two of His Best Loved Poems by Jim Scott Orrick

A Prayer (from the Book of Common Prayer)

King of glory, king of peace,
who called your servant George Herbert
from the pursuit of worldly honors
to be a priest in the temple of his God and king:
grant us also the grace to offer ourselves
with singleness of heart in humble obedience to your service;
through Jesus Christ your Son our Lord,
who is alive and reigns with you,
in the unity of the Holy Spirit ,
one God, now and forever. Amen.

*A note on sources…

The biographical information in this post was obtained from the Oxford Dictionary of the Christian Church (edited by Livingston and Cross) and also from Saints on Earth: A biographical companion to Common Worship (by Darch and Burns).

My default translation is the NRSV (note: I say “default” not “favorite”). Recently the text block started to detach from the cover and so I decommissioned it. I thought about having it rebound but decided to just get a new one instead. I went with the Oxford NRSV without Apocrypha, genuine leather. Here are some pics:

It came with a nice two-piece cardboard box case.

Genuine leather is typically a little stiff right out of the box. Because “genuine leather” is made from pig skin it is certainly not as supple as calfskin or goatskin, but it is still miles better than “bonded leather”. The gold foil really shows up nice against the black. 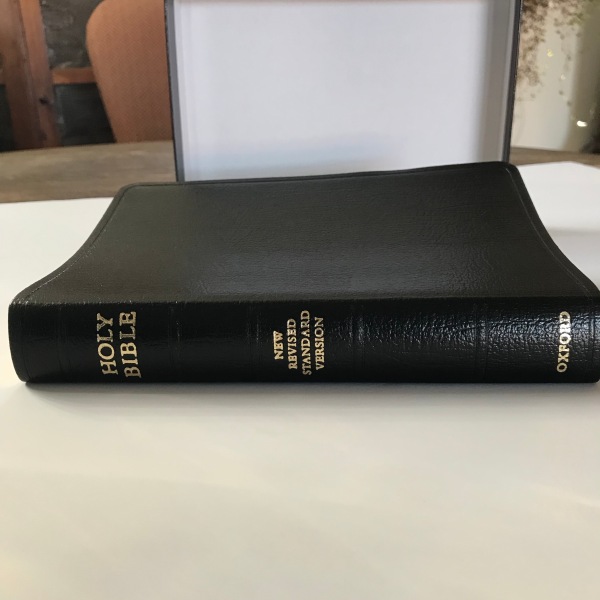 The edge of the cover is stamped with a border which you can see in the picture below, along with the grain which is also stamped (as opposed to a natural grain)

The gold gilt line inside the cover is nice and thick.

The sewn binding allows it to lay flat nicely. And the two golden ribbons complement the black cover.

The pic below displays the way the two-column text block looks within a narrative book (the pic above displays the poetry format). I like that it is a simple text edition, without references or study notes, though if you want to write in the margins there isn’t much room for that. 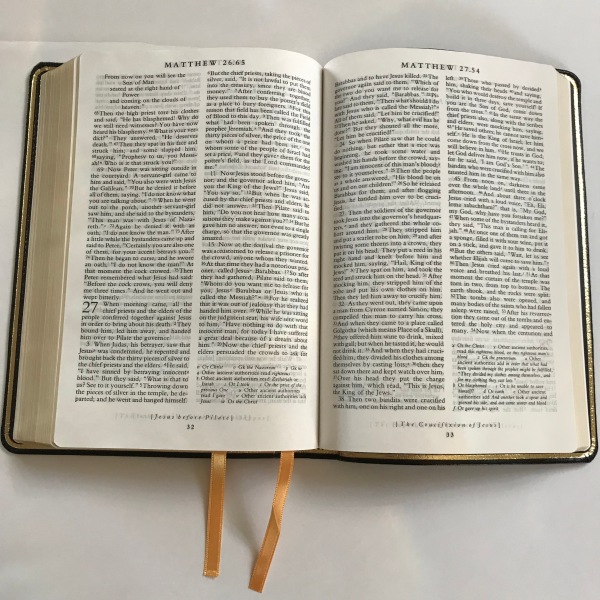 And now for the gymnastics…

These pics show the relative strength and flexibility of the genuine leather. You can also see the nice shiny gold gilt page edges. 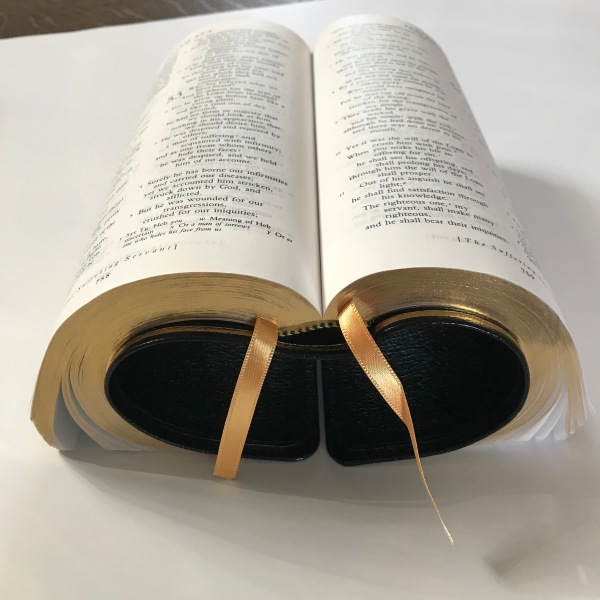 Although the pages are smith-sewn the spine is glued together so that the sewn pages remain together. The glue that can be seen in the pic below could either be from that process or from glue used to attach the tail band.

Unfortunately, there is considerable bleed through on the pages. 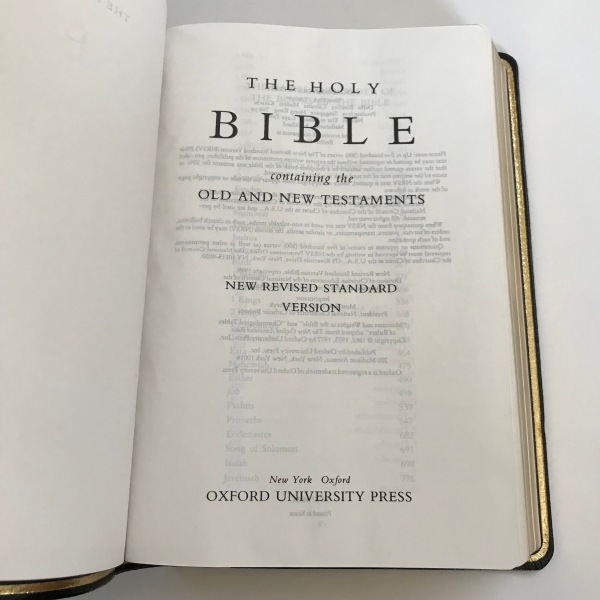 Though, it’s not as devastating in the main text. 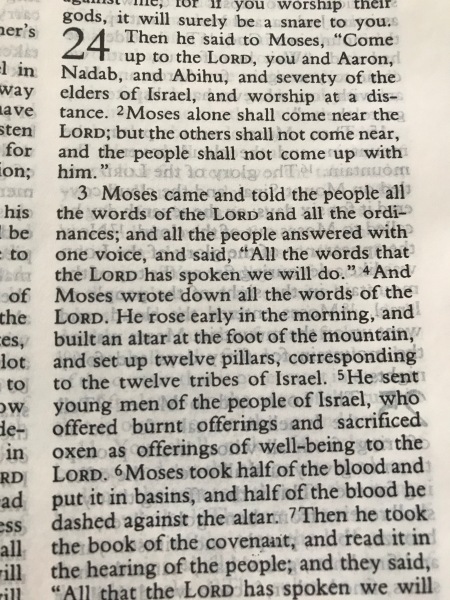 There is a 96 page concordance in the back which, interestingly, includes references to the apocrypha. This is a nice feature if you have a separate copy of the apocrypha laying around.

There are 8 pages of full color Oxford maps. 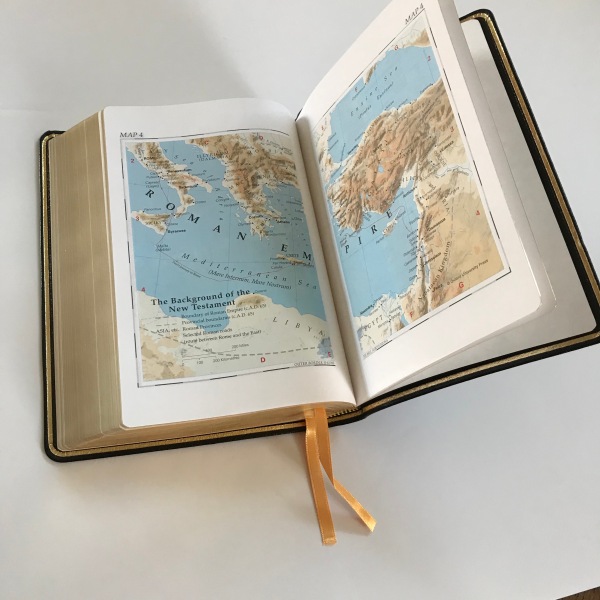 My favorite feature of this Bible is the size. I have owned several premium Bibles but most of them are either too thick, too wide, or too small. This one is just right. Perfect size for personal reading, traveling with, and even preaching (if that’s something you do :)).

All in all, this Bible manages to hold a nice in-between spot between cheaper and premium Bibles. The genuine leather will last much longer than bonded leather but does not cost nearly as much as goatskin or even calfskin.

Fortress Press has a great sale going on right now for kindle books. Here are a few that caught my eye (averaging 85-95% off):

These are all great deals!