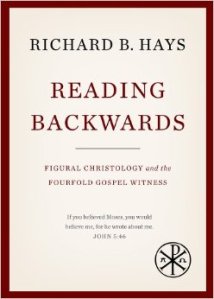 Richard B. Hays’ new book, Reading Backwards: Figural Christology and the Fourfold Gospel Witness, is a short read but there is a lot to digest in its 109 pages. Each of the four Gospels is given a chapter. In this post I will limit my reflections to his chapter on the Gospel of Mark.

By way of review about the book in general, in the preface Hays states clearly that the book is an

For Hays, the concept of ‘mystery’ is essential for understanding how Mark crafts his narrative around the person of Jesus. He points out that Mark is generally more cryptic and allusive than Matthew (who much more often states explicitly “This took place to fulfill what had been spoken through the prophet , saying…”). Mark’s strategy of indirect reference and subtle allusions to the Old Testament cautions us against speaking too quickly about the mysterious identity of the Carpenter from Nazareth. In other words, there is something crudely wrong with stating so blatantly and matter-of-factly that “Jesus is the God of Israel.” Such a brash declaration fails to do justice to the transcendence and profoundness of the truth contained in the affirmation. And some might even say that kind of statement oversimplifies an incredibly complex identity; Hays quotes Rowan Williams, “There is a kind of truth which, when it is said, becomes untrue” (31). The point is that the identity of Jesus cannot be boiled down into such an unqualified two-dimensional statement. Instead, Mark chooses to drop dynamic hints about the identity of Jesus by way of careful selection of stories (and careful telling of those stories), hints that leave the reader to silently ponder who this Jesus was, drawing his categories from the Old Testament.

Here is how Hays concludes his interpretation of Mark’s figural Christology (an interpretation which he notes is not far from the way Mark’s Gospel is read in the Orthodox tradition):

So, if we seek to read Scripture through Mark’s eyes, what will we find? We will find ourselves drawn into the contemplation of a paradoxical revelation that shatters our categories and exceeds our understanding. We will learn to stand before the mystery in silence, to acknowledge the limitation of our understanding, and to wonder. The ‘meaning’ if Mark’s portrayal of the identity of Jesus cannot be rightly stated in flat propositional language; instead, it can be disclosed only gradually in the form of narrative, through hints and allusions that project the story of Jesus onto the background of Israel’s story. As Mark superimposes the two stories on one another, remarkable new patterns emerge, patterns that lead us into a truth too overwhelming to be approached in any other way.

I do have some questions about how Hays establishes an Old Testament allusion. As one example, at times Hays seems to rest his reading of the OT allusion on the repetition of a couple key phrases (and perhaps also thematic similarity?). I want to ask, is the repetition of phrases enough to establish an admittedly cryptic allusion? It would be nice if more evidence could be adduced to demonstrate the presence of an allusion.

Notwithstanding my unanswered questions, I deeply appreciate this kind of reading of Mark’s gospel. As a footnote, I think it provides a convincing explanation of the shorter (in my opinion, genuine) ending of Mark. If the shorter ending is original, then Mark ends his gospel with this authorial comment: “Trembling and bewildered, the women went out and fled from the tomb. They said nothing to anyone, because they were afraid” (Mark 16:8). This mysterious concluding statement has generated a history of complex textual emendations and additions by scribes in the centuries to follow Mark’s writing. Why would Mark end his gospel in such an unexpected way? Well, if Hays’ reading is correct then it should not be so unexpected after all. Mark has been preparing his readers for this kind of reaction all along. As Hays puts it,

readers who listen carefully to the resonances of Israel’s Scripture in Mark’s Gospel and then see how the story drives toward the passion narrative may find themselves, like the women in Mark’s artful dramatic ending, reduced, at least for a time, to silence…The fear of the women is, of course, a response to the message of the resurrection of Jesus the Crucified One. I would suggest that a similar response of reticent fear and trembling is equally appropriate when we read the story of the crucifixion, if we have rightly followed Mark’s narrative clues about the identity of the one on the cross.

To this I simply offer a hearty AMEN and AMEN!