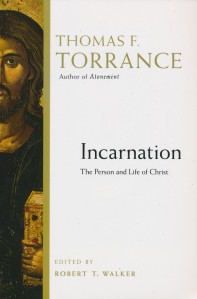 I’ve been reading Thomas F. Torrance’s Incarnation: The Person and Life of Christ a second time and I am once again struck with how profound Torrance is in his understanding of the incarnation of the eternal Son of God into our human being.

This is evident in his discussion of the virgin birth as a sign in relation to a thing signified:

Or the insightful way he thinks about the virgin birth in relation to the resurrection:

In fact the birth of Jesus of the virgin Mary and the resurrection of Jesus from the virgin tomb (‘where no one had ever yet been laid’) are the twin signs which mark out the mystery of Christ…The incarnation is not only a once and for all act of assumption of our flesh, but the continuous personal union of divine and human nature in the one person of the incarnate Son, a personal union which he carried all the way through our estranged estate under bondage into the freedom and triumph of the resurrection…These are then the twin signs testifying to the miraculous life of the Son of God within our humanity, the one at the beginning and the other at the consummation of the earthly life of Jesus. Both these acts were sovereign creative acts of God’s grace in and upon and out of our fallen humanity, and they are, in the full sense, one continuous act including the whole historical life and work of the incarnate Son.

Or once again, explaining what the virgin birth teaches us about a new humanity:

[T]he incarnation of the Son in our humanity has its source in the hidden creative act of God, but it also assumes a form in the entry of the Son into our humanity which is appropriate to and is required by the nature of the incarnate Son as creator  as well as creature…It reveals God as the creator and redeemer actually with us in our estranged human existence, and as God bringing out of our fallen and sinful existence a new humanity that is holy and perfect.

Or, finally, consider how Torrance sees a fruitful analogy between the virgin birth and the salvation of each new believer:

John of Damascus remarked that Mary conceived through her ear: she heard the Word and the Word spoken by the Spirit in her ear begot himself in her and through her, and so the Word which Mary heard and received and obeyed  became flesh of her flesh. That is the normative pattern for the believer in his or her attitude toward the Word announced in the gospel, which tells men and women of the divine act of grace and decision taken already on their behalf in Christ…As in the annunciation of the word to Mary, Christ the Word himself became flesh, so in the enunciation of the gospel, we surrender in like manner to Christ the Word now made flesh, and there takes place in us the birth of Jesus, or rather, we are in a remarkable way given to share through grace in his birth and to share in the new creation in him. That is the Christian message – the Christmas message…What happened once and for all, in utter uniqueness in Jesus Christ, happens in every instance of rebirth into Christ, when Christ enters into our hearts and recreates us. Just as he ws born from above of the Holy Spirit, so we are born from above of the Holy Spirit through sharing in his birth.

The above selections of text are all quoted from chapter three, “The Once and for all Union of God and Man: Christ’s Birth into our Humanity” (pgs.87-104).

If you buy and read this book over Christmas it will be the most profound “Christmas book” that you read this year. Guaranteed.

Buy it from Amazon here: Incarnation: The Person and Life of Christ